This Cast Iron Apple Crisp features tender sweet apples in a warm cinnamon, brown sugar, and apple cider sauce and topped with a crispy oat topping then baked until golden brown and bubbly.

If you love apple season and easy apple desserts as much as I do, then you'll love this cast iron skillet apple crisp recipe.

Using brown sugar, cinnamon, and apple cider, we make an easy sauce packed with warm flavors to coat the apples. Then, old-fashioned rolled oats, flour, brown sugar, and cinnamon come together with softened butter to create the crispy chewy topping.

It's the perfect fall dessert and a great way to use up your bounty after apple picking at your local apple orchard!

Apples - The best apples for baked apple desserts are ones that have a firm texture and don't easily fall apart. I suggest using Pink Lady (what I used), Gala, or Honeycrisp apples. You could also use Granny Smith apples for a more tart crisp.

Lemon Juice - Helps to prevent the apples from turning brown.

Brown Sugar - Gives the crisp its sweetness. I suggest using brown sugar since it provides a richer flavor. However, white sugar will also work.

Cinnamon - Adds a spiced flavor to the apple filling and crisp topping. Cinnamon and apples are always happy to hang out together.

Corn Starch - Provides thickness to the sauce. Otherwise, it would become very runny and watery as it bakes.

Apple Cider - The brown sugar cornstarch mixture needs a liquid to make it "saucy" and using apple cider really helps to amp up the flavor.

Oats - Old-fashioned rolled oats give the crisp topping more texture. It's actually the key difference between a crisp and a crumble.

Salt - Using salt in desserts helps to elevate the other flavors. I always recommend using either kosher or sea salt rather than table salt.

Note: Full list of ingredients, their amounts, and instructions can be found in the recipe card below.

Preheat the oven to 375 degrees F.

In a large mixing bowl, toss the peeled diced apples with the lemon juice. Set aside.

In a bowl, whisk together the old-fashioned oats, all-purpose flour, brown sugar, cinnamon, and salt.

Add the softened unsalted butter to the oat mixture and mix until it is all combined. Set aside.

Hint: I like to use my hands for this since not only is it the easiest way to do it but it also incorporates the butter better. However, you can also use a fork or pastry cutter.

Meanwhile, whisk together the brown sugar, cornstarch, cinnamon, and salt.

Pour in the apple cider and simmer, stirring often, for 2 minutes or until the sauce has thickened.

Remove the pan from the heat. Add the diced apples to the sauce and toss to coat.

Spread the apples in an even layer. Then, sprinkle the oat mixture over the top of the apples so that they are completely covered.

Transfer the cast-iron skillet to the preheated oven and bake for 35 to 40 minutes or until the apples are soft and the topping is golden brown and crispy and the edges are bubbling.

Allow the crisp to rest for 10 minutes then serve it warm with a scoop of vanilla ice cream for the perfect dessert!

Transfer the crisp to an airtight container for storage. It can be kept at room temperature for up to 2 days.

You can also keep it in the fridge for up to 5 days.

It can be reheated in the microwave in 15-second increments or in the oven at 350 degrees F for 10 minutes or until warmed through.

Simply allow the crisp to cool completely then place it in a freezer-safe container and freeze for up to 3 months.

When you are ready to eat it, allow it to thaw, then bake it at 350 degrees F for 10 minutes or until warmed through.

Did you make this recipe?

I'd love to hear about it! Please leave a star rating ⭐️ ⭐️ ⭐️ ⭐️ ⭐️ and comment below!

I love seeing your photos! If you make this recipe don't forget to mention @ThisHomeKitchen and tag #thishomekitchen on Instagram!

Get my newest recipes, kitchen tips and tricks, and the latest news right in your inbox! 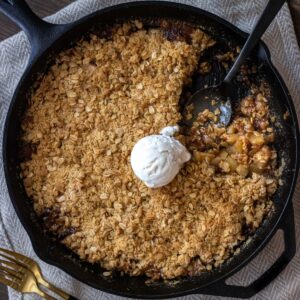 Hi! I'm Alicia. I'm the recipe developer behind This Home Kitchen. Here, you'll find easy, cozy, family-pleasing recipes to help you bring your loved ones around the table.