This Honey Glazed Spiral Ham is the perfect easy ham recipe. With just a few ingredients, you'll have a delicious ham with the perfect balance of sweet and salty. It's an impressive main dish to feed a crowd with little effort.

This easy recipe is the perfect way to feed a crowd making it the perfect addition to any holiday meal or special occasion! Whether it's an Easter lunch or Christmas dinner, this ham recipe is sure to get rave reviews!

Juicy tender ham is baked at a low temperature to keep it moist and it's coated in a sweet sauce that turns sticky and delicious as it bakes.

Why You'll Love This Recipe!

Spiral Sliced Ham - I prefer a bone-in spiral-cut ham for several reasons. First, the bone gives the ham flavor as it bakes and can help keep it moist. Two, the glaze can get down in between the slices and flavor more of the ham. Finally, the slices are already cut for you which makes it an easy no-fuss way to serve it.

Honey & Brown Sugar - Ham is a highly salty meat that pairs well with a sweet sauce. I like to combine honey and brown sugar to give the glaze a more well-rounded flavor. The honey becomes sticky while the brown sugar becomes deeply caramelized.

Fresh Thyme - Thyme and ham go together very well. Adding the fresh thyme to the glaze while it simmers allows it to infuse into the sauce.

Note: Full list of ingredients, their amounts, and instructions can be found in the recipe card below.

Preheat the oven to 325 degrees F. Line a large roasting pan with aluminum foil or use a large disposable roasting pan placed on a baking sheet for stability.

Place the ham in the pan and cover with foil. Bake for 1 hour.

When there are 10 minutes left, add the honey, light brown sugar, dijon mustard, and thyme to a medium saucepan and bring to a simmer over medium heat. Gently simmer the sauce for about 5 minutes or until the honey mixture thickens.

Return the ham to the oven uncovered. Bake for another hour, basting the pan drippings over the ham every 15 minutes.

Once the ham is done baking, allow it to rest for 10 minutes before serving. Pour the remaining glaze from the bottom of the pan into a gravy boat or other serving bowl to serve along with the ham.

Items You May Need

You can absolutely line a large roasting pan with foil and bake the ham in there.

However, the honey and brown sugar become extremely sticky while baking, especially anywhere that began to caramelize or burn. It can be very difficult to clean.

For that reason, I like to use a disposable roasting pan for easy clean up.

Feel free to use other herbs or spices. Whole cloves stuck into the ham or ground cloves added to the glaze are very traditional.

Rosemary and tarragon also pair well with ham and can be added to the glaze in addition to or as a replacement to the thyme.

Keep leftover ham either on the bone or pulled off in an airtight container in the fridge.

Ham will stay good for about 5 days.

To reheat in the oven, preheat the oven to 325 degrees. Place the ham in an oven-safe baking dish and bake uncovered for 20 minutes or until warmed through.

To reheat on the stove, place a slice of ham in a pan and heat over medium-low heat until warmed through, about 5 minutes.

To reheat in the microwave, place a slice on a microwave-safe plate and heat at 50 percent power in 1-minute increments until warmed through.

Ideas For Side Dishes

Will the outside still get crispy bits baking it at only 325 degrees?

Yes! The outside still gets little crispy bits and the sauce becomes sticky and thick. The benefit of roasting the ham at a lower temperature is that the thickest part of the ham can fully warm through without drying out. With this method, you get a nice juicy ham.

Why do I need to baste the ham?

As the ham bakes, some of the sauce will run off and mix with the pan drippings. Basting this over the ham every 15 minutes will add a ton of flavor to the ham while keeping it moist and tender.

Can I use another type of ham?

Sure! Whole ham, half ham, and boneless ham are all great choices and can be made exactly the same way. The downside to using one of them is that the sauce won't get down in between the slices and you'll need to carve the ham when it's done cooking.

Do I need to use a meat thermometer?

Did you make this recipe?

I'd love to hear about it! Please leave a star rating ⭐️ ⭐️ ⭐️ ⭐️ ⭐️ and comment below!

I love seeing your photos! If you make this recipe don't forget to mention @ThisHomeKitchen and tag #thishomekitchen on Instagram!

Get my newest recipes, kitchen tips and tricks, and the latest news right in your inbox! 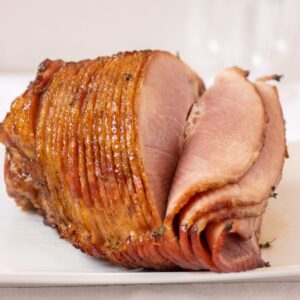 Line a roasting pan with heavy-duty foil or use a disposable foil roasting pan for easy clean-up. The honey and brown sugar will caramelize and become very sticky as they bake making clean up difficult.

Hi! I'm Alicia. I'm the recipe developer behind This Home Kitchen. Here, you'll find easy, cozy, family-pleasing recipes to help you bring your loved ones around the table.